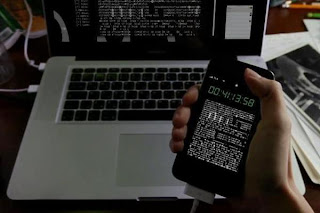 I just happen to watch the Reboot movie (http://rebootfilm.com/) last week, which is available for download for $2.99  I wanted to add my two cents about the film before the new year even though I am sure there are already numerous reviews out there. A short synopsis of the film is a young hacker named Stat awakens to find an iPhone attached to her hand. The iPhone has a timer counting down but Stat is not sure what happens when the phone hits 00:00. She called on the aid of her two hacker co-workers Bren and Eva who have been looking for her. As they all try to figure out what has happened to Stat, she has memories of events that has lead her to her current situation. She remembers talking and confronting a very infamous hacker named Jesse. He seems to be the cause of all of Stat's trouble and apparently, his plan is to start a technology revolution that will change the world. It is up to Stat and her friends to figure out what is going on and to stop Jesse from his techno-terrorism before it is too late.

I have to say I love the film. It feels like it is a prequel too. The beginning and ending leaves you with so many questions that you want more of the movie. The film is a quick look of the "Information Age". However, I wish it was made into a full-feature film. It has the components to make it a thrilling 2 hour movie. It included everything that makes a good hacker movie.  I loved that it had a clear definition of white hats and black hats. The benefits of penetration testing and actual exploits being used. There were no pretty glowing lights representing vulnerabilities being exploited. Any movie that has MetaSploit in it has to be good right?

I think we need a new hacker movie. Something that gets it right.  It should really takes a look at the actual hacker community and all its "hats". Reboot does that for a brief moment, but it just feels too short even though it has a good actors/actresses in the movie. I would recommend this film to anyone who wants a ride into "hacktivism" and technology. It should definitely be in your wishlist.
Posted by Agoonie at 1:26 PM 2 comments: